What in tarnation!
A second poem about castration?
You might be thinking, “Oh, brother
How, oh how, could there possibly be another?

Jackson Galaxy is a cat behaviorist
On neutering your pets he strongly does insist
In last night’s show two episodes explored
This neutering theme, not to be ignored

And the cats were better off, trust Jackson on this
The critters went from misery to happiness and bliss
So you see? Poetry can be found in castration
And aren’t we all glad I’m done with this creation?

Abelard and Heloise: The Musical 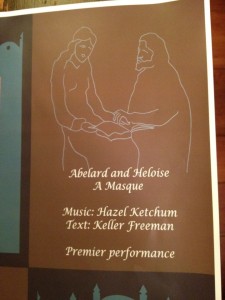 The concept is rather quizzical
I mean, what in tarnation?
Their love affair ended in castration

In the Twelfth Century Abelard taught Latin lit
And Heloise, his star student, would sit
And listen to his brilliance hour upon hour
Until he got her pregnant and things suddenly went sour

Here’s where the castration thing comes into play 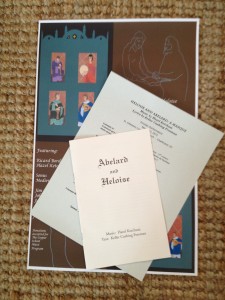 The Pere Lachaise Cemetery in Paris now holds their remains
And me, a medieval historian and a tad bit insane
Visited them on Christmas day a long time ago
And last night I went to see their musical show

Abelard’s calamities are not for the faint of heart
But setting them to lyre music provides a good start
Odd-shaped bongos, tambourines, and an instrument I know not
For a donation at the door, I sure got a lot.