The fourth book of the Cassie Baxter Mysteries is available on Amazon. 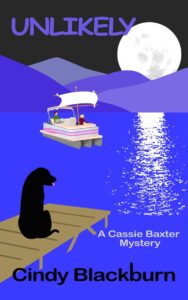 Welcome to Lake Elizabeth, Vermont, where the lake has finally thawed, spring has finally sprung, and Cassie Baxter is going nuts. Who wouldn’t go nuts when an innocent birdwatching outing with her young son uncovers an abandoned canoe? A canoe. Way, way up on Elizabeth Mountain. Unlikely? Oh, yeah. Especially since Cassie has a history of finding—troublesome—canoes. And speaking of troublesome, Cassie’s father has a new girlfriend. An—unlikely—girlfriend. In fact, unlikely romances are sprouting up all around the lake this spring. There’s Pru’s, and Maxine’s, and Lindsey’s and—And do any of these budding romances have a bearing on the murder? Have we mentioned the murder? We did say that unlikely canoe could only mean trouble, right?

The third book of the Cassie Baxter Mysteries is available on Amazon. 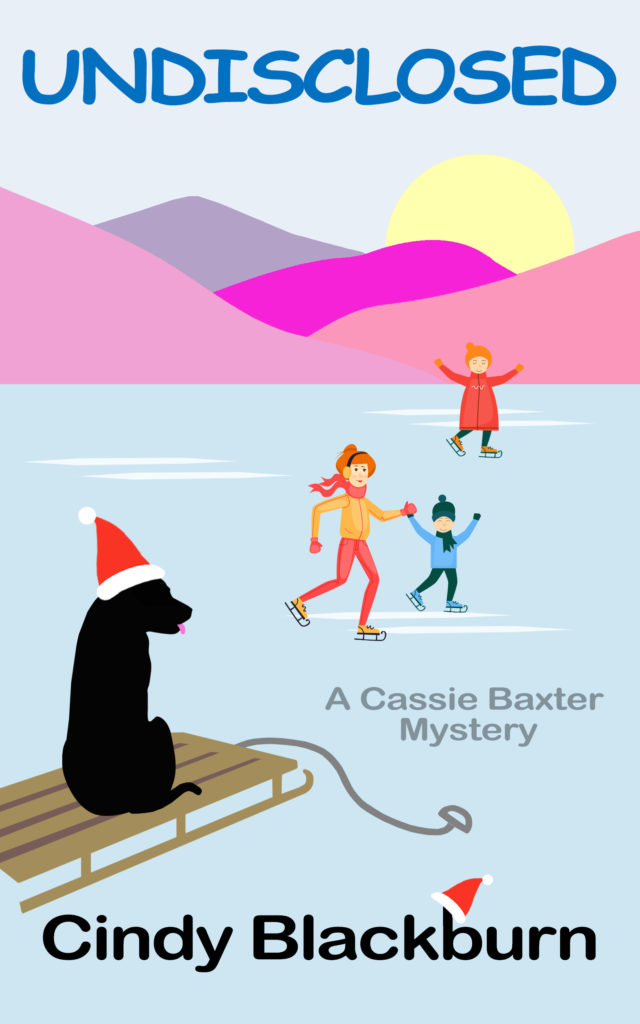 Welcome to Lake Elizabeth, Vermont, where Santa Claus is due to arrive any day now, and Cassie Baxter is going nuts. Who wouldn’t go nuts? This is her first Christmas with her adopted son Truman, and she’s desperate to make it memorable. But that human skull the kid found when he was searching for Christmas decorations in the attic wasn’t exactly part of the plan. And Joe Wylie, Cassie’s supposed boyfriend, isn’t making life any easier either. Then there’s Cassie’s father, and her best friend Bambi, and her other best friend Sarah, and all those crazy, quirky, kooky neighbors that make Lake Elizabeth—Lake Elizabeth! Santa’s sure to have a jolly good time when he finally does come to town, and so will you when you read what Cassie and Truman intend to do about that skull!

The second book of the Cassie Baxter Mysteries is available on Amazon! 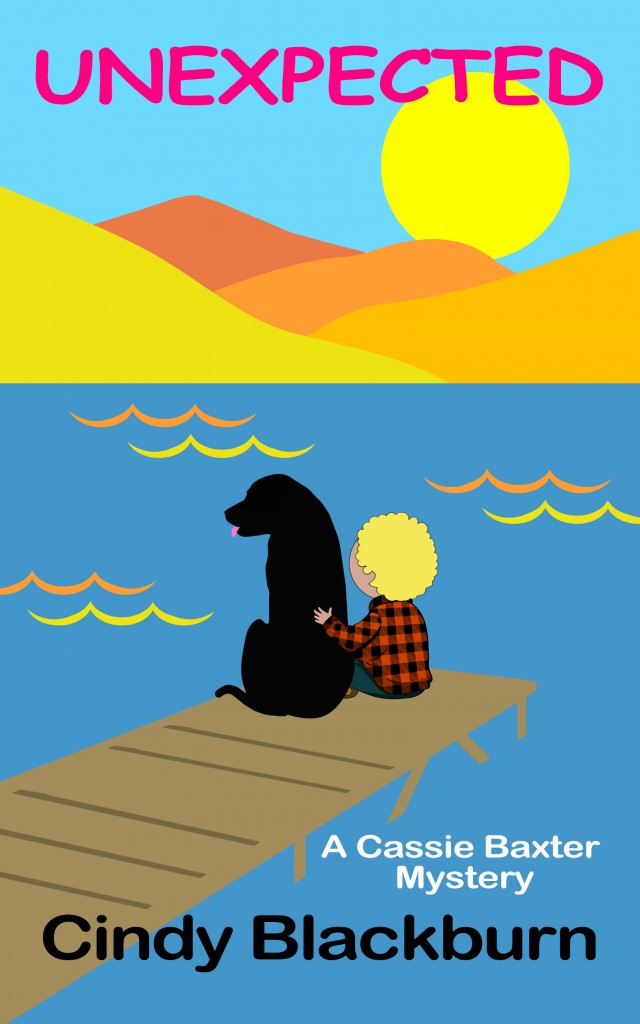 Welcome to Lake Elizabeth, Vermont, where the water’s growing colder, the leaves are turning orange, and Cassie Baxter is going nuts. Who wouldn’t go a little nuts with this latest unexpected development? Meet five-year-old Truman Tripp. Cassie, who is most definitely not a kid person, can’t understand why his mother left the child with her. But some even more perplexing problems soon present themselves, and Cassie’s already Looney Tunes life gets even loonier. Expect the unexpected when Lake Elizabeth’s most unlikely duo, Cassie and Truman, team up to catch a killer.

“An Unexpected pleasure! Cindy Blackburn’s thoroughly amusing and altogether quirky Cassie Baxter is back in her second mystery and along with the usual suspects she has brought an unexpected guest! A must read cozy that will not only have you laughing out loud but will also give a few tugs at your heart strings!”
J. W. Reinhold, Amazon review

“This is probably my favorite of all Cindy Blackburn’s novels. And I enjoyed them all, even on second and third readings.”
Fern H., Amazon review

The word that best describes “Unexpected” by Cindy Blackburn is “delightful.”
Patricia Gligor: Author of The Malone Mysteries

The first book of the Cassie Baxter Mysteries is available on Amazon! 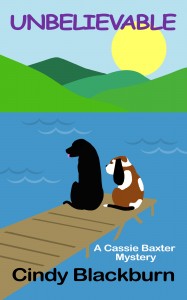 Welcome to Lake Elizabeth, Vermont, where the water is blue, the mountains are green, and Cassie Baxter is going nuts. Who wouldn’t go nuts in a town this size? What possessed Cassie to move in with her father? And why do they have to live next door to a mad scientist? A sexy mad scientist. Does such a thing even exist? And speaking of existing, what happened to the dead redhead? You know, the one Cassie found, and then lost? What’s up with that? Cassie Baxter intends to find out. Read Unbelievable and you will, too.

“Quirky characters, quirky writing, but such a funny, fantastic read. Give it a go; you won’t be disappointed.”
Leah Harvey, Amazon review

“Humorous, action-packed, theories galore, and a fantastic setting for a complex murder mystery. Can I say more? Yes, the location has you drooling to hit your kayak or canoe. Just not alone.” Cozyreaders, Amazon review

“I am a HUGE fan of this author’s Cue Ball Mysteries series and the new Cassie Baxter series does not disappoint. For a very enjoyable laugh-out- loud read, BUY THIS BOOK!”
Deb M., Amazon review

“Love the author’s quriky sense of humor and fast-paced storyline. A book you will want to save for a rainy day, because you won’t be able to put it down.”
Sportygal, Amazon review

The Cassie Baxter Mysteries: They’re not Cue Balls, but they are screw balls.

CBMysteries started here, folks!! Playing with Poison, the first Cue Ball Mystery, has over 750 reviews, and most of them are five-star! 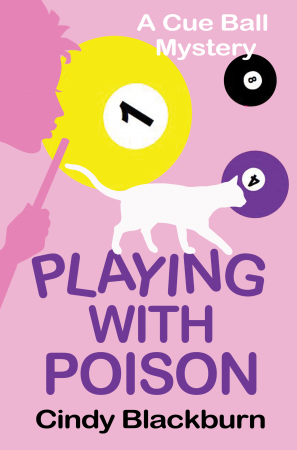 Pool shark Jessie Hewitt usually knows where the balls will fall and how the game will end. But when a body lands on her couch, and the cute cop in her kitchen accuses her of murder, even Jessie isn’t sure what will happen next. She also isn’t sure how to catch a killer, but she’s about to learn.

Her skill set doesn’t exactly fit the task, however. Jessie put herself through college hustling at a pool table, and nowadays makes her living writing racy novels. This middle-aged romance author has excellent people-watching skills, a keen imagination, and street smarts going way back. Come to think of it, Jessie is the perfect sleuth.

Playing With Poison is a cozy mystery with a lot of humor, a little romance, and far too much champagne.

“I love when a book, especially a new book in a new series, kicks off with a bang!”
Cozy Mystery Book Reviews: Keep Calm and Read a Cozy Mystery

“These characters are a hoot!!”
Escape With Dollycas Into a Good Book

“Jessie is the new sleuth that you will want to follow again and again.”
Bestselling author, Tonya Kappes

Double Shot is available on Amazon or as an audiobook. 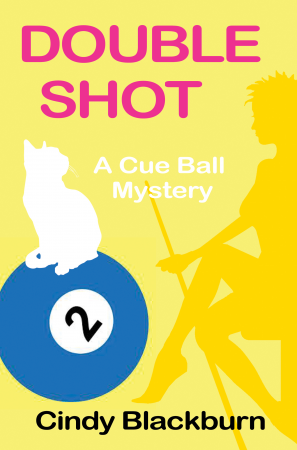 Jessie Hewitt thought her pool-hustling days were long gone. But when uber-hunky cop Wilson Rye asks her to go undercover to catch a killer, she jumps at the chance to return to a sleazy poolroom. Jessie is confident she can handle a double homicide, but the doubly-annoying Wilson Rye is another matter altogether. What’s he doing flirting with a woman half his age? Will Jessie have what it takes to deal with Tiffany La-Dee-Doo-Da Sass and solve the murders? Take a guess.

“The antics this quirky cast of characters get into are hilarious, and I enjoyed every minute of it.”
Dru’s Book Musings

“I enjoy most cozy mysteries that I read, but there are a rare few that I stay up until 2am finishing in one sitting. Double Shot fits into the second group. I couldn’t put it down!!”
Cozy Mystery Book Reviews: Keep Calm and Read a Cozy Mystery

“The second book in Cindy Blackburn’s Cue Ball Mysteries series is another fun jaunt with Jessie and her friends.”
Melissa’s Mochas, Mysteries, and More

Three Odd Balls is available on Amazon or as an audiobook. 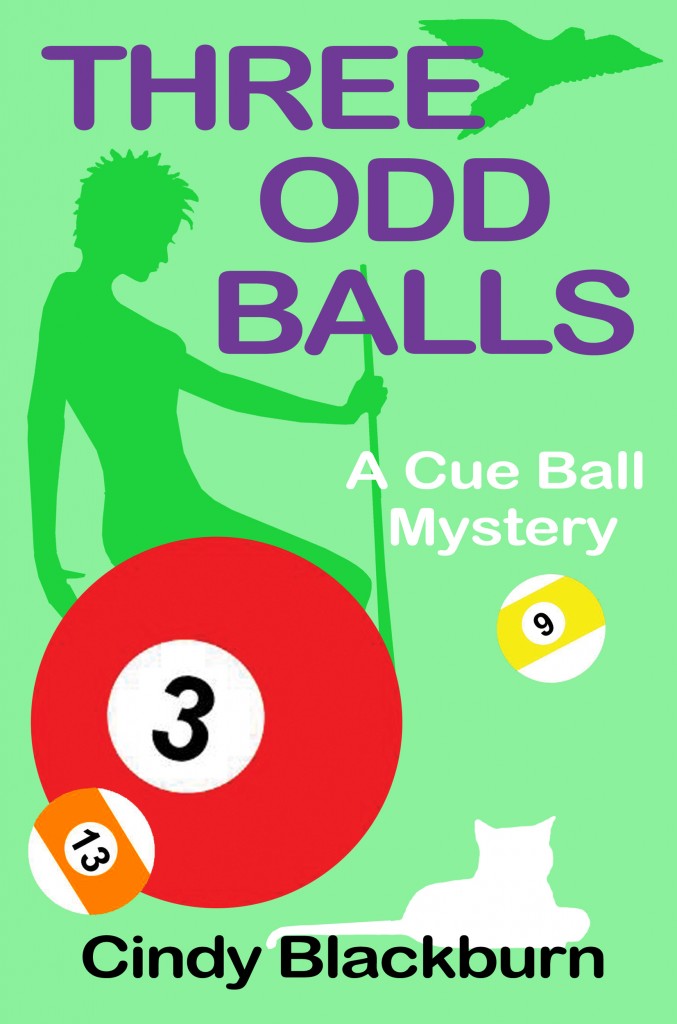 A romantic vacation for…five? This wasn’t exactly what Jessie and Wilson had in mind when they planned their trip to the tropics. But when Jessie’s delightfully spry mother, Wilson’s surfer dude son, and Jessie’s rabidly hyperactive New York agent decide to tag along the fun begins. What kind of trouble can these three oddest of odd balls possibly get into? Take a guess.

“Three Odd Balls is another wonderful installment in this series. I’ve never played pool in my life, but that doesn’t stop me from enjoying this series.”
Cozy Mystery Book Reviews: Keep Calm and Read a Cozy Mystery

“I had a rollicking fun time reading this book.”
Dru’s Book Musings

“In a series full of hijinks and adventure, this third Cue Ball Mystery just may be the most fun yet.”
Melissa’s Mochas, Mysteries, and More

Four Play is available on Amazon or as an audiobook. 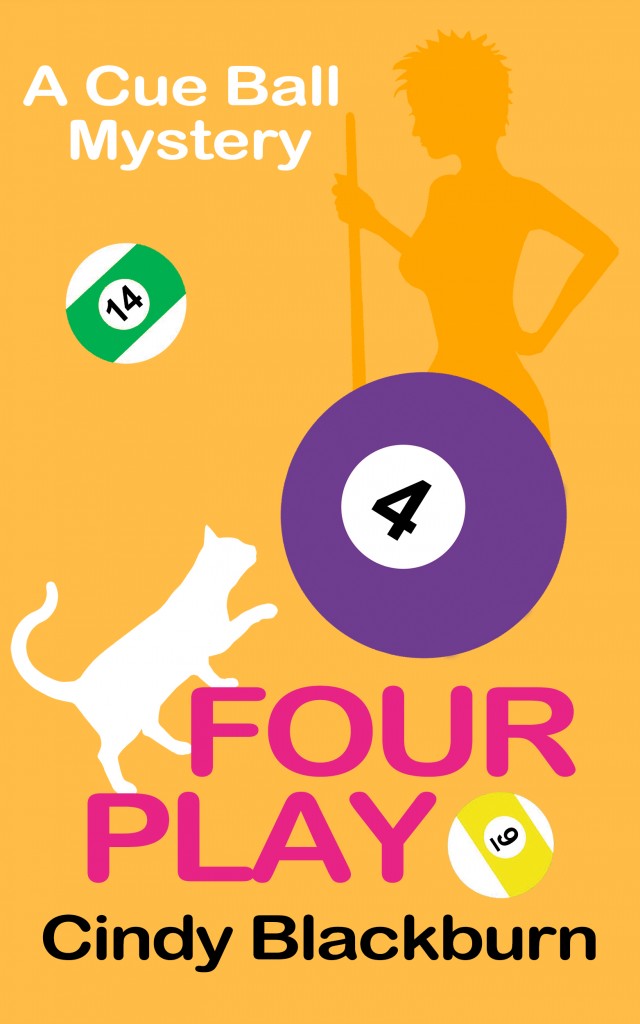 Bad news comes in . . . fours? For romance author and former pool shark Jessie Hewitt it does. She hasn’t written a decent sex scene in months, she hasn’t shot a decent game of eight ball all year, and don’t even ask about her supposed love life. And just when Jessie thinks things can’t get any worse, a body lands on her car. Uber-hunky and altogether infuriating cop Wilson Rye suggests she concentrate on solving her other problems and leave the murder investigation to the experts. But does Jessie agree? Take a guess.

Four Play: Jessie Hewitt and company are back four loads of fun in their fourth Cue Ball Mystery. Four sure. Four certain. You can count on it!

Five Spot was a 2015 Amazon Scout selection and is available at Amazon. 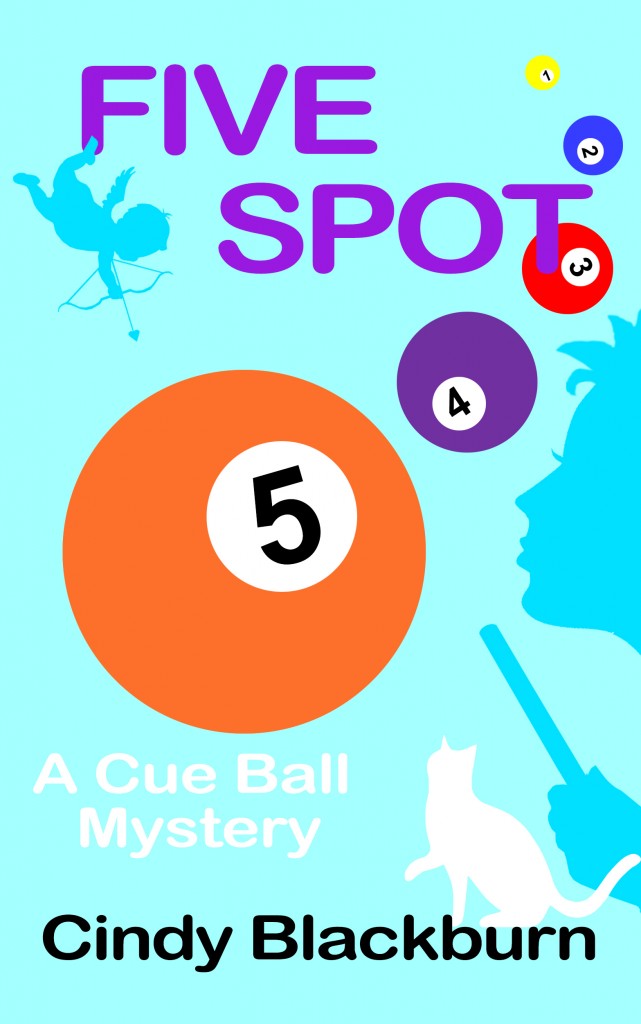 At long last! Jessie Hewitt is about to take her rightful spot in the Hall of Fame. No, not the one for pool sharks. This is the Romance Writers Hall of Fame. Jessie’s so excited she’s even convinced über-hunky cop Wilson Rye to tag along for the induction festivities. But things don’t go exactly as planned. How could a conference called Happily Ever After take such a wrong turn? Take a guess! 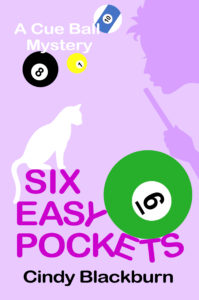 Pool shark Jessie Hewitt likes to call the shots. But apparently her two best friends didn’t get that memo. Candy Poppe has taken up with the wrong man. And Karen Sembler? She’s been kidnapped! Jessie’s no-nonsense husband, Wilson Rye the cop guy, suggests she leave the crime-solving to the experts and the love lives to those involved. Does Jessie listen? Take a guess.

Six Easy Pockets is loaded with all the humor, mayhem, and mystery Cindy Blackburn’s fans have come to expect. But this one also includes a millionaire, a mansion, and a princess! Enjoy!