Whether you got A’s in math or F’s you are in for a treat! The fabulous Jim Jackson, author of the amazing Seamus McCree Mysteries and mathematician extraordinaire, is also a world class poet! Take it away Jim…

Let’s talk numbers, you and me.
Six: it’s as perfect as perfect can be.
Take its divisors: one, two, and three,
Add them together: six again. See?

Can you find the next one all on your own?
No fair cheating: Googling on your phone.
No rolling your eyes and letting out a groan.
Here’s a hint: weight in pounds of exactly two stone!

Are you up for a math trick designed just for you?
Multiply the first digit of your age by five –please do!
Now add three to that sum and multiply the total by two.
Check your work carefully to avoid a boo-boo.

Time to please add your last digit into the mix.
Remember that perfect number – the first one, you know, six?
Subtract it from the total and your age should appear.
But really, you don’t look a day over twenty-one, my dear.

Just in case my math did not translate well,
I’ll do it myself, just so you can tell,
If the trick really works without a headache.
Here’s the arithmetic I would have to make:

Sixty-five is my age, so multiplying six by five
Equals thirty. Plus three is the next piece of jive.
That sum times two is sixty-six, to which I add five
For seventy-one. Now less six and <poof>, sixty-five!

Here’s a trick with number reversals you might know.
I’ll give an example to help you follow the steps below.
Take any three digits zero to nine
And reverse them in order to make our design.

An asterisk is needed to make the rules clear.
Leading zeros are necessary to include, I fear.
Start with 028 and the formula will steer
You to 1,089, if to the rules you adhere.

I see your eyes glazing, so I’ll stop this whimsy.
I know the rhymes were forced, and the rhythm was flimsy,
But admit in the comments if you were entertained.
Or tell me if you think this whole thing was harebrained.

James M. Jackson (Jim) authors a series featuring the financial crimes expert Seamus McCree. ANT FARM (2015), a prequel to BAD POLICY (2013) and CABIN FEVER (2014), won a Kindle Scout nomination. BAD POLICY won the Evan Marshall Fiction Makeover Contest whose criteria were the freshness and commerciality of the story and quality of the writing. Jim has also published an acclaimed book on contract bridge, ONE TRICK AT A TIME: How to start winning at bridge, as well as numerous short stories and essays.

Long ago, in a galaxy far away, Jim earned a BS in Mathematics and an MBA concentrating in finance. His work would have bored most people, but he’s always enjoyed the playful side of numbers and language as his poem today demonstrates.

To find out more about Jim, his writing and how to contact him, check out his website http://jamesmjackson.com

So what do you think, folks? Jim really is a world class poet, huh? When I invited my fellow Kindle Scout winner to guest on my little old blog I had NO idea. I’m sure you enjoyed the rhymes and the number games as much as I did. If so, please leave Jim a message below, and by all means, buy the man’s books!! And I’m sure I speak for everyone when I say, Thank You, Jim!

Whimsical Wednesday With Friends is back!

And with a splash! Penny Hibshman hits the nail on the head with her terrific ditty about a hairdo. Thanks, Penny!

I walked into a new salon
and huddled by the door.
Heart in throat, eyes wide with fright,
I could stand my hair no more.

I edged up to the booking desk
stood rooted to the floor
“I’d like to get a little trim,
an inch, not any more.”

Mr. Michael took my hand
and led me to his chair,
The mirrored wall was to my back
He began to cut my hair

I watched him as his scissors flew
His face began to change
Eyes opened wide and slightly glazed
He looked a little strange.

I settled down and closed my eyes
the hair began to drop
I heard the scissors snip, snip, snip
I thought they’d never stop.

The chatter of the scissors paused
I thought that he was through
I raised a hand to check the length
He barked a “Please don’t move”.

I paused with hand still in mid-air
Then let it slowly fall
My friend had said, “He’s really good!”
to worry to at all.

I’ve heard that uttered many times
and lived to feel regret
A new salon is rather like
a bad game of roulette.

Suddenly the chair turned round
I had to sneak a peek.
What I saw made my jaw drop
I gave a ghastly shriek.

Like a ewe I had been shorn
my hair was such a fright.
Any soldier would be proud
I had a “high and tight”!

Women have a rule of thumb
You’ve heard it this I know.
No matter what they do to it
Your hair will always grow!

They get clean eventually
And grow out again
I brush on new polish
They’re okay, but then

Look! Over there
Some weeds are now growing
About that new manicure?
Guaranteed, I’ll be blowing

If Hubby would
Simply agree
If the man would
Suddenly see

That I’m the one
Who’s always right
Whatever the problem,
Purpose, or plight

If only he would
Trust me on this
Oh happy day
And marital bliss!

Husbands, perhaps
Might argue this point
Get themselves riled
A bit out of joint

But wives everywhere
Will surely agree
And right now are saying
“Just listen to me!”

You can’t miss it!
Well, take a guess what
The phrase fills me with fear
And puts knots in my gut

Whimsical Wednesday With Friends is back!

Here’s fellow author (she writes Sci-Fi) Pamela Barchers’ contribution! Pam recently attended a writers workshop, and was given the following assignment: Write about a drunk guy at a bar. Easy, you say? Well here’s the catch. Pam had to write the description with no E’s. That’s correct. Zero E’s. She did it! And here’s her A+ assignment. When she does use E’s, Pam writes the Adelia Kayland Personal Logs–the adventures of a space traveler! 1st log up–Out Of Time, available on Amazon, along with Time Again and Manipulated Time. Check it out! But before you head over to Amazon, be sure to read about that drunk guy with no E’s…

Here is a link to the book: Out of Time by Pamela Barchers

Drunk with no E’s

Sitting in a bar, I spy a man who has had too much to drink.

I think I know this man.
Oh right, it’s Frank who owns a cabin a block down from us.

It’s obvious, from watching him wriggling on his stool, that Frank will soon go looking for a bathroom.

This is wrong, I’m thinking.
I thought Frank didn’t drink.
His brown suit looks dingy; has his old “ball-and-chain” thrown him out again? Poor thing!

I was right in my first assumption; Frank and his dingy brown suit slid off of his stool, stumbling forward to look for a bathroom.
Painfully, I watch this poor guy work his way forward, bumping into things, and gaining odd looks from many happy hour participants.

Finally, as Frank was almost to his mark, a crowd of idiots (thinking it funny) join to block his way.
Laughing at him mockingly, said boys would not allow him to pass.
Starting to pity him, I stood up to assist.
(Actually, I was not to worry for long.)

Surprisingly, I saw Frank work things out on his own, by unzipping his brown dingy pants, and casually urinating on a culprit’s foot!

Whimsical Wednesdays With Friends is back! And today’s fearless and multi-talented guest poet is my friend and fellow writer, Paula Benson. For the fourth year, Paula and collaborators John Henry and Frank Fusco wrote an original musical for their church’s drama ministry. This year’s production, “Once Upon a Christmastime,” was adapted from “A Christmas Carol.” The opening number was a take off on “Bad, Bad Leroy Brown.” The picture from the production is by Rob Sprankle.

Take it away, Paula…

Nobody likes him
And you wouldn’t either!
Bad, bad, bad Ebenezer
He only cares about his wealth.

“BAD, BAD, BAD EBENEZER”
Lyrics and Music by Paula G. Benson
From: ONCE UPON A CHRISTMASTIME
A Christmas Musical based on Charles Dickens’ A Christmas Carol

I always knew my cat Betty was whimsical. But a poet, too? She shocked me yesterday when she tapped out this ditty, her very own Ode to Halloween. She hopes it puts fear into the hearts of rodents everywhere… 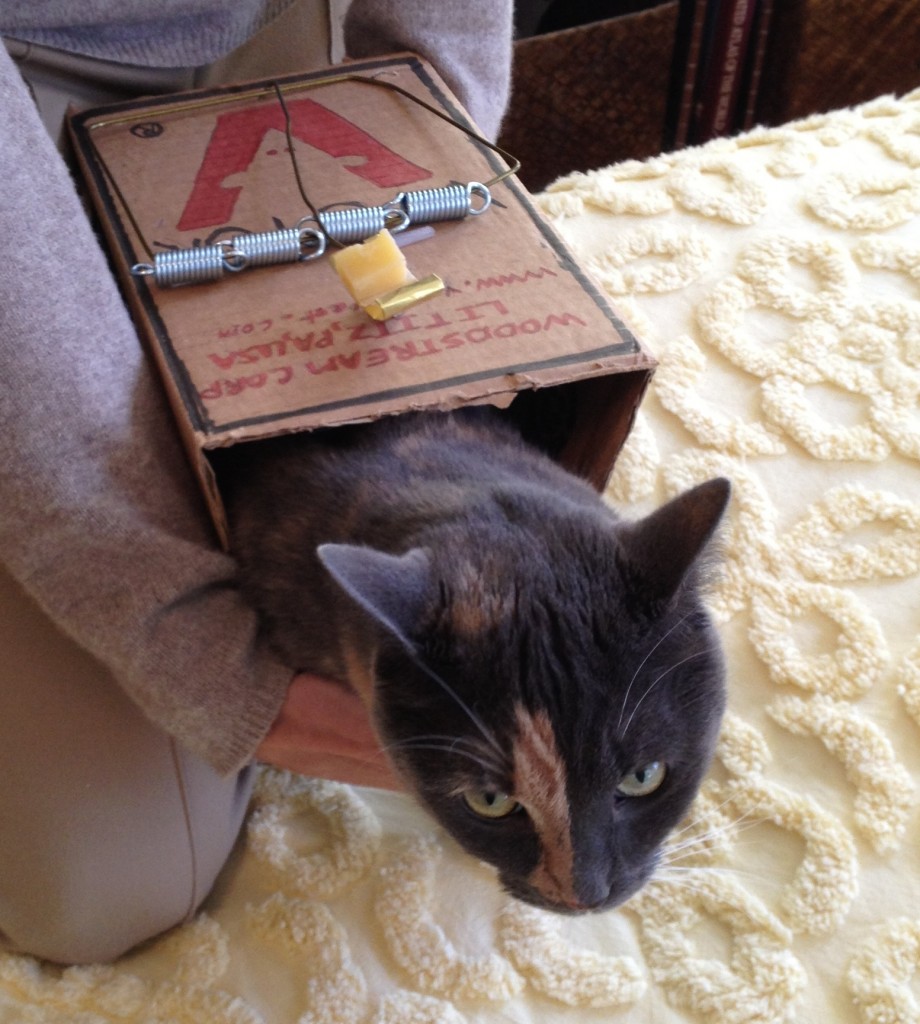 I’m your gal!
When mice venture near me
I give them hell

Mice don’t scream
Is that what you say?
But when mice venture near me
They do rue the day

That’s claws and teeth
And a quick-stepping bounce
When mice venture near me
I promise I’ll pounce!

Used by permission of the cat.
All further rights Reserved